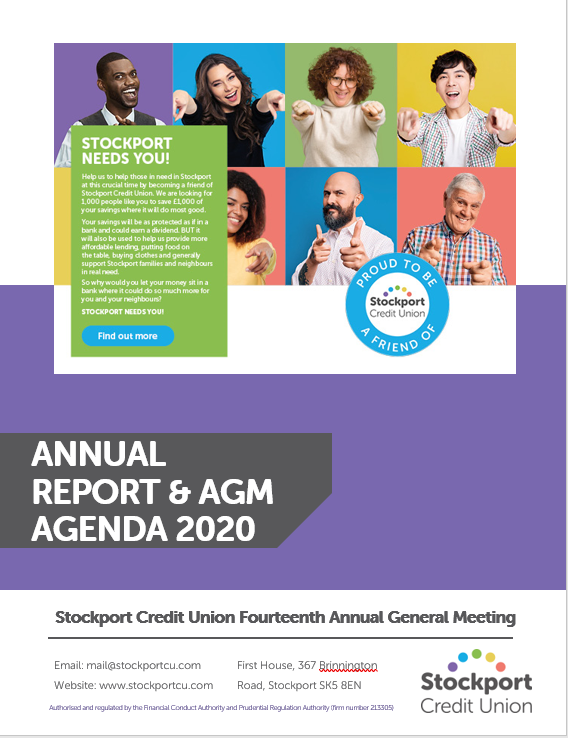 Following the postponement of the Stockport Credit Union Fourteenth Annual General Meeting due to COVID19 the Board are pleased to announce that this has now been rescheduled to Saturday 16th May 2020.

The full notice of the rescheduled AGM along with Annual Report and Ballot Paper can be found at www.stockportcu.com/agm

As you may be aware, FCA and PRA regulations require us to hold our AGM before the 31 March 2020 and this is part of our Rules, but the government regulations restricting the movement and gathering of people prevented us from carrying out that obligation.

On 20 March the FCA released a bulletin which said:

“It would be for societies to take reasonable steps to ensure they meet any obligations they are under as soon as reasonably practicable. Societies will want to consider alternative arrangements such as making use of video conferencing where permitted.”

Given this strong message from the regulator the Board consulted the governing Rules of the Credit Union to ensure the democratic voice of members was able to be heard without a physical AGM. As such, the Board have worked very hard to get the video conferencing technology in place alongside a system for voting and a new style Annual Report so that both the members and the regulators can be satisfied.

We have made formal notification of the rule breach to both the PRA and FCA, as required, and as part of this notification have submitted detailed plans of how we intended to address this breach and meet our obligations to you, our members.

We are pleased that we have been able to mobilise a solution so quickly and hope that this will serve as an opportunity to broaden inclusivity and access to the AGM among the membership.